This page summarizes various interviews I have had, and articles that have been written about me.


Mick came out west fresh out of Bawating High School from Sault Ste. Marie, Ontario with the band Shama. Shama toured Western Canada and was managed by Bruce Allen (Bryan Adams , Martina McBride ) before disbanding. From that point he became the lead guitarist of TRAMA, managed by Sam Feldman (Joni Mitchell, Diana Krall, Elvis Costello, Norah Jones) then on to playing mainly bass for the band PARADOX with Jeff Neill from Streetheart and Bernie Aubin from The Headpins.

Currently on the live scene, Mick keeps an extremely steady schedule playing guitar, bass and keyboards with his main band 'Cease and Desist ' and the show “Atlantic Crossing ” where Mick performs as 'Sir Elton John' and is the bass player/vocalist with Canadian Rock Legend, Randy Bachman's Band. Randy’s recent foray in the jazz world with his new cds, ‘Jazz Thing ’ and 'Jazzthing 2' has also kept Mick on board playing the ‘upright bass’. When Bachman and Turner reunited, Mick was also tapped to play with them in studio and in concert. In between all of this, he works as a solo artist and produces and engineers for many clients at Millennia Sound Design. 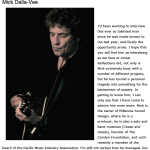 This is a PDF copy of an interview that I did with Linear Reflections in Nov. 11, 2002. 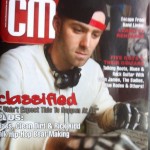 This is an article that was recently published in the June 2013 Canadian Musician Magazine.