A picture of Johnnys – mostly unchanged since it was turned into ‘Rosa’s’ a few years back. 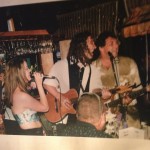 6 thoughts on “The Magic of ‘Johnny’s Place’”