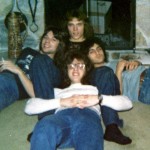 Whenever I’m in Grand Prairie, my mind floats back to me at 18 years old, on the road with Shama. Although I thought I was emotionally prepared and mature enough to handle being out on the road, I found out by the third month of traveling that I wasn’t.
Michael Sicoly and I left Sault Ste.Marie to join Jeff Neill and Brien Armstrong on January 2nd of 1976. We flew to Vancouver because Brien’s brother-in-law had two homes there… One in Surrey where we would sleep, and one up the road in Delta where we would rehearse. ‘Barney’ was established out in the prairies, and since Michael and I were replacing the two other members of the band, it made sense business-wise to work within that market.
In the posts of this site is the Shama story…yet to be finished and I apologize for that (one day I will) but I don’t want to repeat myself too much within these little posts and stories.

We started playing as Barney, but after one of the former members protested our continuing to use the name (sending a legal Cease & Desist letter ironically) we changed our name to Shama. Brien had bought a thesaurus and found that name along with a few others. A Shama was an East Indian bird noted for its ‘good song’, so we went with that.

In January we rehearsed for 4-5 days at Brien’s brother-in-laws house in Delta BC and hit the road; although not to the prairies yet but for a three week stint at the Barclay Hotel in Port Alberni,BC and then straight to The Park Hotel in Red Deer, Alberta for a week, The Sahara Nights in Regina for two weeks (halfway through that engagement we became Shama), then The Westlander Inn in Medicine Hat Alberta for two weeks…. On and on….this would continue for two years before we would let ourselves play in The Vancouver area.

Shama had great success almost immediately. Looking back it was a very good young band. The playing and vocals were quite unparalleled for the circuit back then.

But then we found ourselves playing The Harwood Hotel in Moose Jaw Saskatchewan. By the end of that engagement the walls came crashing down on me.
On our second weekend there, the coat check girl had asked Brien if we would like to go to an after-party. Brien asked the band and Jeff and I said yes we would. Michael had decided to stay back at the hotel. Brien offered her a ride with us to the party. We all got into our Ford Econoline van parked in the back alley when all of a sudden we heard a smash against the van. We looked to see a garbage can rolling away, and about 5 guys standing there with ‘that look’ on their faces. Brien got out to investigate and they swarmed him.

Although it was all quite innocent, one of the guys apparently had ‘a thing’ for this coat check girl and armed with just enough liquor and a few of his friends, he was going to ‘right this wrong’.
I ran back into the hotel and called the police. The police arrived fairly quickly, and although Brien handled himself well, he had been punched in the throat (Adam’s Apple) very hard, which meant he couldn’t talk for a few weeks after that. Being that Brien still fronted our ‘Barney Elvis’ show, for the odd venue that expected it, it was not a small problem on that level alone.

The police wouldn’t do a thing. Apparently most of these guys had very connected parents in the community, and the police didn’t want to press charges. It was safer for them to just let the travelling minstrels ‘be on their way’.

We left Moose Jaw to head to our next gig at The ‘Hi’ Holiday Inn in Yorkton, Saskatchewan. All of a sudden I realized where I was… 1000’s of miles away from home and absolutely vulnerable.

For the next while I had what I now think was a mild nervous break-down. I would cry endlessly… Stopping just long enough to play a set, then run upstairs to my room to continue to cry. The world in a blink of an eye had become a horrible place to my young mind. I had gone from feeling extreme joy in pursuing my life’s dream with these great musicians to complete and utter terror of what ‘the real world’ was like.

When I was a little younger, I had been ‘saved’ through a friend of mine. He had started hanging out with a very strict Christian lad who’s father was the minister of a very strong evangelistic Finnish Lutheran Church. My friend Jon had become ‘born again’ and was actively after me to ‘be saved’ as well. I was never a bad kid… But with the fear of hell and damnation, I ended up doing my little pledge of allegiance to ‘The Lord’ and found myself questioning everything in life all of a sudden.

Although this period in my life probably only lasted a few weeks before I unchained myself from the crushing weight of being this ‘born again’ kid, the memories of what the pastor had said haunted me. One of the things he had told me was that playing music for anything or anyone other than ‘The Lord’ was a sin and I would spend my eternity in hell because if it.

These thoughts started to roll around in my young mind in Yorkton. Was God punishing me for playing music in bars? Maybe I had to quit my dream. Maybe I needed to repent. Maybe maybe maybe…. In short I was driving myself crazy and couldn’t stop crying.

I phoned my dad and my brothers (back when phone calls pretty much sucked up my entire pay cheque) to lament and cry. My dad told me on several occasions, “Son, you can always come home…” Which made me cry even more.

Ironically my good friend Jeff Neill with his ‘driven attitude’ helped snap me out of it. He had had enough!
One day he just looked at me and said, “Look…if YOU can’t handle it, f**k off back to The Soo! NOBODY’S going to stand in the way of my career. Either get it together or leave!”

That was the catalyst that started me back to being myself. While everyone else was coddling me to help me through my terrible time, Jeff took that whole other approach. What he said rang a bell in my head. I had to break this thing!

Now back to Grand Prairie. We were hired to play the Grand Prairie Motor Inn for two weeks. On the very first night we played, I met two guys in the bar. They were a little older than me (probably early twenties) and as we talked, they informed me that they worked at a halfway house for wayward teens. Intrigued, I asked them if I could go there with them and they agreed to it. They picked me up the next day and drove me to ‘the house’ which actually was just across a large wheat field from the hotel.

As I met with the kids, they asked me a lot of questions about being a musician. Most of them were shocked when I admitted I didn’t do drugs and seldom drank. The lady who ran the centre thanked me for coming and remarked that the kids seemed to really like me. Before I left, I asked her for her number. I had an idea…

The next day I met with the hotel manager and asked if I could have the cabaret for free on a Saturday afternoon. When he asked why, I stated that I wanted Shama to do a free show for these kids to show them that people still cared for them. He said he would think about it. The next day he agreed to it. Now I had to convince the band. For the most part, the guys were happy to play this ‘Sock Hop’ for the kids.

I phoned the head mistress of the house and told her. She thanked me and we spoke of the time of the show and logistics etc.
In short, It was a great success… The kids loved it… And loved that they knew the guy in the band!
When it was done they all asked me to join them all at the house for dinner. I happily agreed.

About two hours later, I walked across the field to that house. I looked up the sky and said, “if you need to take me, take me now! I know I’ll go to heaven!”

I needed to prove to myself that music could be used for good, benevolent purposes. The fog had lifted…