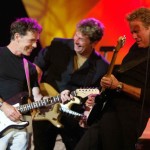 having a good time on stage with Bruce Greenwood, and Don Felder. 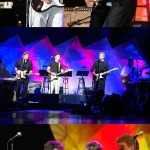 On Stage with Don Felder and Bruce Greenwood (collage)

Cease and Desist got a call to back up Don Felder from The Eagles, as he was going to play onstage during the ‘Courtnall Celebrity Classic’ in Victoria. The event raises money for mental illness disorders and this was the first of what was to become a semi-annual event.

I was thrilled of course. Having been an Eagles fan from ‘Take It Easy’ on upward, I felt incredibly lucky to be in the band picked to play behind him. We were to do ‘Life in the Fast Lane’, ‘Hotel California’ and ‘another song’.
At soundcheck I found out that Bruce Greenwood and Don are quite good friends (golfing buddies) and that Bruce is a musician as well as an actor, so he would be taking on the vocals for these songs.
Don Felder’s gear was supplied locally (I assume Long & McQuade)… a Strat, a Fender Amp (I recall it be a Deluxe Reverb) and a Tube Screamer distortion pedal.
As soon as we started running through Hotel California at sound check, THERE WAS THAT SOUND!!! Goes to show you that 90% of a guitarists ‘sound’ is actually out of their fingers… not the gear they use.
After soundcheck, we went back to our hotel rooms and were scheduled to be back in our green room an hour before we took the stage.
Backstage in that green room, Don Felder answered a whole lot of questions (mostly from me it seemed) about the Eagles, and although he was at that time in a law suit against them (notably Don Henley and Glen Frey), he answered with grace and enthusiasm.
I asked where the idea for Hotel California came from (his music, Don Henley’s words) and he had said that because all of the Eagles were from all over the USA originally, they all had talked about the effect coming to California for the first time and how it felt to all of them. They all had admitted to each other that, at the time, it felt like driving into the belly of the beast… and that there was no going back now. That was the impetus for the lyric.
He had said that they had recorded the entire Hotel California track starting on an E Minor, and that Henley would drive around with a cassette of it in his car to sing along to and conjure up lyrics and phrasing.
When it came time to do the vocals for real, Henley found that the song was totally out of his range! He had been singing along with it in the car but in a weak falsetto… but he couldn’t hit the notes in full voice at all.
So they had to scrap that version and redo the song starting on B minor.

Regardless it turned out to be simply ‘a rock classic’. It’s overplayed to this day, but I never tire of it. The vocals, the playing, the double lead guitars at the end with Don Felder and Joe Walsh steadfastly holds it as one of the best songs radio has ever played.

At the Courtnall Classic that year was also: Michael Buble,(who went on before us) Chad Kroeger (with just an acoustic guitar), Kid Rock and Pamela Anderson (who was dating Kid Rock at the time), David Foster… and on and on…. the night carried on at the large nightclub ‘Legends’ in The Strathcona Hotel after the gala ended. It seemed everyone got into it later that night. There were no instruments left to play, so David Foster simply conducted the band to try to put some dynamics to the cacophony that sometimes ensued. 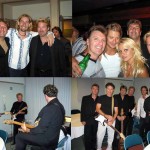 Here’s a video (sorry no sound) of me playing bass behind Kid Rock with Chad Kroeger on guitar:

Quite a night of memories….