It was an ingenious marketing strategy dreamed up by Shama’s ‘manager of the moment’, Dallas Goodmanson, who operated the Regina, Saskatchewan office of the Canadian prairie’s leading music agency, “Nellis Booking Agency”
The idea was to literally ‘spread’ these fake fifties everywhere. On the front, when folded in half (note the crease down the middle of the front), it would look for all intents and purposes like someone had dropped a fifty dollar bill. We, of course, were hoping on people’s greed and figured they would quickly scoop it into their pocket without looking at it twice. 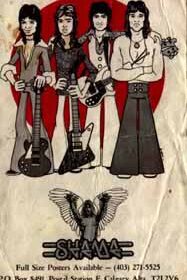 When they would get to a ‘safe haven’, they would then unfold it and see our clever little ad on the other side.
As the investigating officers later told us, we had made some major mistakes when these 5000 items were printed. (YES! Five THOUSAND!)
First of all, it’s illegal to have the queen on a fake bill (Other businesses have done this for instance, but always have used the back of the bill).
Also, it’s illegal to have serial numbers on these ‘fakes’. Also, although it did say ‘SHAMA Money’ and ‘Will NOT pay to the bearer on demand’, it DID, however, say Bank of Canada.
All of this added up to counterfeit… believe it or not!!!

There were apparently cases of street kids getting change for these $50’s from people and running off before the people realized they had been duped.

That is why the police were initially called in.

Unfortunately, the band played (and spread these babies) everywhere in Western Canada, so these ‘Counterfeit 50 dollar bills’ made it from BC to Ontario in a very short period of time.

It seemed that we were questioned by police in every town we played for about a year and a half.
Because of our ignorance, the police took pity on us and we were never charged nor apprehended in any of the cases.

It DOES however, make for a good story.