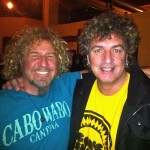 Sammy Hagar with Me. Separated at birth perhaps?

Sometimes there’s never a dull moment – brothers from a different mother… or at least the same follicle family.
The picture above was taken at the Gibson showroom in Toronto. Sammy was in Toronto for Music Week. He had just recently sold off his interests to ‘Cabo Wabo Tequila’ for high 8 figures and had reputedly invested a portion of it back to a rum company that was to be based out South Asia.
Sammy was as smiley as you see in this picture. We didn’t talk music so much as just niceties and joked about how similar our hair and features were.

That night we were playing The Mod Club with Bachman & Turner and he decided to pop in for a guest spot during the encore. As he walked in the back door, he yelled out ‘Hey Mick’ (it’s always nice when people remember your name)…
Shortly after this little set we did, he scooted out the back door…

All in all a great experience… Sammy’s a good guy….